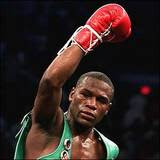 ''Pretty Boy'' Floyd Mayweather Jr., aka ''Money'' Mayweather, has done his best to set himself apart from all other boxers and certainly he has some interesting observations about why he might be so unique and about anyone who isn't thoroughly entertained by his skills.

''Larry Merchant is just a commentator, he don't know nothing about boxing.''

From the HBO documentary, Mayweather/Hatton 24/7:

Floyd on his mother's praise of him as a child:

''I think she knew that I was special because I think I was better than the rest of the kids.''

Floyd Mayweather Jr. on himself (I'll leave it out of context for laughs):

Although at the time Floyd mentioned this last thought, he did appear to both be black and have some hair, I still believe him...why would anyone lie about that?