The eventual corruption of George Foreman (A Funny Boxing Quote) 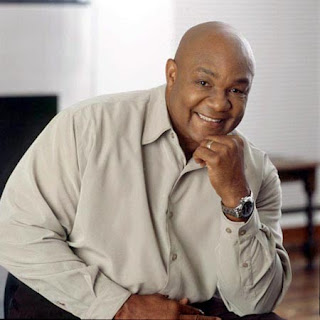 
Well, we're a few hours away from the fight with Roy Jones Jr. and Felix 'Tito' Trinidad and HBO was smart enough to give us a refresher course again as they do before their PPV fights. In order to remind us of the kind of fighters about to go toe-to-toe, they showed one of each of their previous fights. Last night, they showed 2003's Roy Jones Jr. vs John Ruiz match and followed that up with the excellent Trinidad vs Fernando Vargas fight from 2000. The Trinidad/Vargas fight is a landmark for me because it's the night I realized that Larry Merchant had rubbed some of his bizarre whimsy off onto former champ, grill-daddy and sometime commentator George Foreman. Yes, that's right, we're quoting Larry Merchant again...it won't be the last time either people. Mark my words. Better yet, mark his.

So, here's the setup. The commentators ringside for HBO at the fight are Larry Merchant, Jim Lampley and George Foreman. Fernando Vargas has always been known as a baby-faced fighter and apparently Trinidad had taunted him about it pre-fight. So, this goofy exchange takes place between our old buddy Larry and Big George:

Larry Merchant: Well, he called him a baby and so far he's uh-done everything except diaper and powder him. But, late in the round, the baby started to yowl.

Poor George, clearly infected with HLLV-The Human Loopy Larry Virus.
Thank God there's no vaccine for it. We'd have so much less material for you.
Posted by JD and Lucy at 6:52 AM No comments: Links to this post