Yes, please do save Journeyman 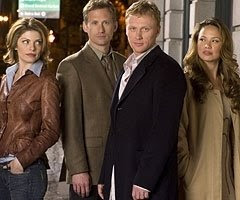 This isn't a regular post and something we've never done on Say what?. We'll keep it short and simple. A really wonderful show is being cancelled and it's called Journeyman. It's a great cast although the most recognizable actor is Kevin McKidd from HBO's epic drama Rome. Journeyman is the story of a journalist named Dan getting sucked into a time-traveling phenomenon. We won't go through the whole plotline but suffice it to say that there was an unfortunate dismissal by TV fans to assume it was basically the new Quantum Leap. If they didn't like Quantum Leap, there'd be no reason to give it a chance and if they did like it, they couldn't see watching a remake of it. So, Journeyman suffered unfairly from the start . We both gave it a chance and as far as we're concerned, Journeyman is easily one of the best series out there and never got the promotional attention that it deserved and certainly hasn't received the time it deserves to grow an audience and attract those that either dismissed it wrongly with the aforementioned assumptions or never heard of it. NBC has given us a show you can sink your teeth into and then snatched it away because it wasn't an immediate ratings smash.

We understand that you need good ratings to keep a show on but the idea that something must be an immediate top ranking show is quite unfair. Neither of us know anyone who has watched the show and not enjoyed it. It is not a Quantum Leap knock-off like some suspect-making the assumption without watching it. Journeyman is no more a copy of Quantum Leap because it shares the fantasy topic of time travel than Sex And The City is a copy of The Mary Tyler Moore Show because they both share the topic of single women living alone in the city. Aside from the idea of time travel, we find it bares no similarity at all. At any rate, we thought we would add to the support by giving some links to the Save Journeyman effort. We registered with Hey! Nielsen and rated the show and will put in for the Rice-a-Roni campaign too and we hope you fellow fans of the show will do the same if you haven't already. We'd have done this post sooner but we assumed the show was on hiatus do to the writers' strike until we saw the Save Journeyman campaign on Digg. Good luck to us all on ensuring quality TV by not letting this show slip through the cracks.

Petition to get a second season of Journeyman: Journeyman Second Season Petition Petition

Posted by JD and Lucy at 6:45 AM No comments: Links to this post