NOT all bark: Lennox Lewis quotes on Mike Tyson 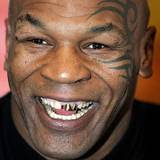 JD's quotes:
Yes, folks. Mike Tyson has made it onto 'Say what?' yet again. You can say one thing about old Mikey...he's NOT all bark and no bite. . .

Lennox Lewis, known as arguably the best heavyweight boxer of his era had a 3-hour show on ESPN Classic recently that reviewed his career. The program is called 'Ringside' and was visited by boxing greats Ray 'Boom-Boom' Mancini and Tommy 'The Duke' Morrison [both former world champs] as well as Lewis trainer Emanuel Steward. He was interviewed by Bert Sugar and of course, Lewis being just one of the boxers to have Mike Tyson bite him, was asked about this interesting experience.

Lennox had this to say about the pre-fight event leading to the biting:

''...There was a bite in my leg and a green ring around that bite and I'm glad I really got the tetanus shot.''

Lennox was also quoted as saying about 'Iron' Mike: ''He reminds me of a cartoon character.''

...I have no idea what cartoon character but he could easily be a mixture of Elmer Fudd and the Tasmanian Devil, I think. Any thoughts?


Since it's close to Christmas now, I thought you'd like to hear this beautiful duet by Jimmy Kimmel and Mike Tyson on ''Winter Wonderland'' from youtube: