Let's pretend O. J. Simpson was never in this one, okay? (Quotes from The Naked Gun) 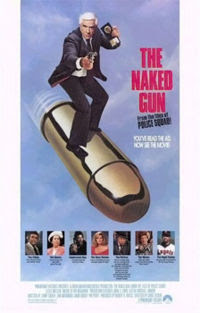 Leslie Nielsen's character, Frank Drebin from the 1988 movie The Naked Gun: From the files of Police Squad!

The Naked Gun series spoof a lot of works but are based off of a 1982 ABC TV series called Police Squad! which was canceled largely for being too hip for the room, so to speak. Leslie Nielsen starred in the series which ran for six episodes in total and took up the same role in the movie series. The math is simple in that there were half as many installments of the Naked Gun movies as there were the original Police Squad! episodes. At least people picked up on the comedy by the time it rolled around to the theatre, having revamped several of the show's gags to make the franchise a great success as far as comedies go. Here are some of the film's most memorable quotes:

1. George Kennedy as Captain Ed Hocken: He's alive Frank, though he's on life-support. Doctors say he's got a 50/50 chance of living,... though there's only a ten percent chance of that.

Priscilla Presley as Jane Spencer: I've heard police work is dangerous
Leslie Nielsen as Lt. Frank Drebin: It is, that's why I carry a big gun
Jane: Aren't you afraid it might go off accidentally?
Frank: I used to have that problem
Jane: And, what did you do about it?
Frank: I'd just think about baseball

3. Frank: Hey, that's a honey of an ankle bracelet you have there
Jane: Oh! Did it slip down there again?

4. Frank: How 'bout dinner? I know this little out of the way place that serves great Viking food.

6. Frank: Jane, since I met you, I notice things that I never knew were there before; Birds singing,. . . dew glistening on a newly formed leaf,. . . stoplights.

If you haven't seen this flick, the dialogue is essentially like that throughout. Couple that with the added bonus of a great sight gag every few seconds and you really miss something every time you blink or answer the telephone. Even aside from the fact that it's packed full of punchlines of all kinds, how do you not like a series of movies with a recurring villain named Papshmir (You can guess how that's pronounced)? Furthermore, if Ricardo Montalban plays one of the bad guys, it doesn't matter if it's Star Trek or Naked Gun, it just works.

Want all three Naked Gun movies? Get them all complete with commentaries on this DVD set:


Check out a hilarious video montage from this classic comedy: