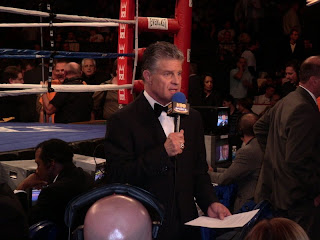 The other night I watched one of HBO's fighter recaps. What they like to do-and I'm glad they do- is show one or two of the most recent or best fights by a fighter before their next big upcoming bout. Ricky Hatton VS Floyd Mayweather Jr. was certainly one of the biggest fights this year and so they chose to show two fights before the big pay-per-view event. They showed Floyd's so-called ''victory'' over Oscar De La Hoya where Floyd managed to mysteriously rack up the punch stats while not landing punches (even sometimes while not throwing them) and Ricky ''The Hitman'' Hatton's victory over a spent legend named Jose Luis Castillo. The introduction to the Hatton/Castillo re-run proves the point that boxing is just plain dirty... I'll prove it with this quote:

Commentator Jim Lampley referring to the anticipation over the Hatton/Castillo bout:

''If Hatton could do Castillo and do him the right way, he'd be in the right position to go on to something very big.''

For just a second there I thought Jim Lampley had switched from HBO's boxing to HBO's Real Sex documentaries. I could almost hear ''Bow chicka wow chicka wow wow wow'' playing in the background. Lampley, I never thought I'd say this to you but...you're giving boxing a filthy reputation. Even Don King never said anything like that.
Posted by JD and Lucy at 9:09 AM 1 comment: Links to this post