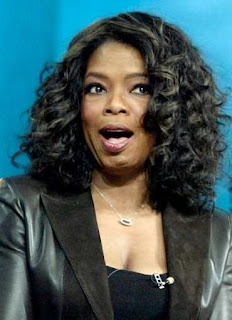 ~ Just look at 'er. You know she's about to say something good.

Ladies and Germs, this is Oprah and The Oprah Winfrey Show's first appearance on Say what?, miraculous as it may seem. Now, I'm not a regular Oprah watcher because they clearly give the audience some type of hallucinogenic drug to rev 'em up like that. Oprah says something like ''I love Versace house slippers!'' and 500 women act like their seats are made by the manufacturers of the Sybian. And, I'm like 'house slippers can't be that good'. However, I did catch yesterday's episode called '237 Reasons To Have Sex', which explored subjects like open marriages and friends with benefits. Dr. Pepper Schwartz was there...No, I didn't make that name up . . . Her name is Pepper and she's a frickin' doctor. No lie.


Anyway, after interviewing people on the street, they got a hold of a 65-year-old woman named Winnie who claims to have had sexy time with her husband in return for a new house. Any objections you may have aside, I say, if your sexy time is still (or ever) worth new-house-value at 65, you probably take vitamins and do yoga 'cause you're doing something right. Today's quote takes place after Winnie admits that her and her husband have sexy time in all sorts of places, prompting the following exchange:

''That's too good. I-That was just too good. 'Cause you know everybody wants to know what hole.''

How To Romance A Roman Woman: Titus Pullo's Lecture On Harmony Between The Sexes 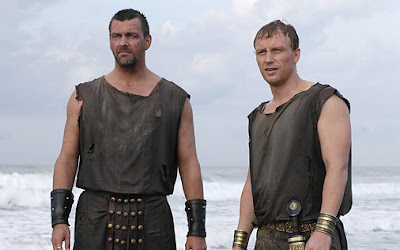 ~ The ancient Roman version of a buddy cop duo. Ray Stevenson on the left as Titus Pullo and Kevin McKidd on the right as Lucius Vorenus on HBO's Rome.
HBO's movie-quality series Rome was a favorite of mine. I was fascinated by the everything about it, including the amazing amount of Britishness...that was weird. Rome's storyline took two names briefly mentioned in a historical account of Rome's war in Gaul by Julius Caesar and developed large, influential biographies during the plot of the show that allowed for great dramatic licence as well as a good sense of the actual political turmoil at the time. The two figures were Titus Pullo (perfectly played by Ray Stevenson) and Lucius Vorenus (played by the immensely talented Scotsman, Kevin McKidd). Rome was the kind of soap opera that a real man such as myself would watch and its humor was certainly not lacking, so blended with the deep drama you'd swear Joss Whedon wrote the damn thing (He didn't, it was Bruno Heller, mostly). Either way, my quotes today are from one of my favorite scenes of the short-lived series.

Roman solider, Lucius Vorenus, comes back from a long military campaign to find he isn't suited for domestic life and is completely incapable of getting along with his now more mature wife and the young children that barely remember their father. Trying to please his wife, he asks Titus Pullo, a fierce but flaky soldier and unabashed ladies man for the best in ancient romantic advice. Taking a walk together, Lucius takes in a brilliant lecture from his subordinate as follows:
JD'S Quotes: Warning: This conversation is just a bit graphic...But informative.

Titus Pullo: Of course, your best method for pleasing a woman is the warm beating heart of an enemy. I mean, women will say they don't like it but they do. It makes them wet as October.

Pullo: Well, failing that, talk to her.

Vorenus: Talk? But of what?

Pullo: It doesn't matter. It's all about the tone of the voice. Pretend you're putting a saddle on a skittish horse. 'There, Honey. Shh, come now.'. You know, that sort of thing.

Vorenus: And that's all?

Vorenus: And what else?

Pullo: Oh, aye. Also, very important: When you couple with her, there's this spot just above her cunny. It's like a little button. Now, attend to that button and she will open up like a flower.

Vorenus, stopping angrily: How do you know this of her?

Pullo, defensively: All women have them! Ask anyone.

Now, when I said this was informative earlier, I pretty much had a handle on everything, personally, save for the warm beating heart of an enemy part. And, with today's current laws...it's just not worth a shortcut to October weather. You know what I mean?