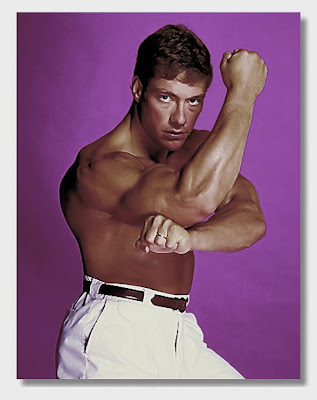 Newsweek and Sarah Ball have made my month. After a long, long layoff from the great and strange Jean-Claude Van Damme, aka The Muscles From Brussels, I finally have a new blurb to cherish for it's WTFness, forever and ever. I love this crazy Belgian waffle brain. Honest, I do. Ever since that dance scene in Kickboxer, where his Muay Thai Master gets him absolutely fit-shaced on rice wine so he can do his sexy dance with barroom floozies and test his Muay Thai skill on their jealous men, I have loved him. I love him and I love that scene, doggone it.

Van Damme has always been... a little Euro-Loopy. First, he was just a fun European and if he seemed strange, it was just a cultural misunderstanding. Then, he was certifiably ''eccentric''. Then, just full-on wacky. That's the natural progression of Euro-Loopyism. That's a real mental condition. Sorry, Europeans. It's nothing personal. I love you all, but there's a percentage of you with this disease. It's medical science. It's on par with Amerigooberism, which is like the American equivalent of Euro-Loopyism. That's also a rough disease. Jay Leno interviews people with it on his Jaywalking segment on The Tonight Show. Very sad. Exploitative (Funny), if you ask me. Irregardless (Which isn't a word, I don't think), here are my chosen quotes from the Nov 15, 2008 Newsweek Van Damme interview, by Sarah Ball:

1. Interviewer, Sarah Ball: ''Why did you want to make a film that comments on your own life?''

Jean-Claude: ''I made this just to show some of the internal side of J.C.V.D., in a way. He's a guy, a normal guy from Belgium with dreams, and I did well in that type of path.''

~ Ah, yes. *That* type of path...The one where you have dreams. The funny thing is that some people who take the type of path where they have dreams tend to do well and others don't. Dreams. Can't live with them, can't live without 'em. (Shrugs) Maybe he specifically meant the path of being a guy, from Belgium, with dreams. I don't know. It wasn't that clear to me. What was clear is that he refers to himself as J.C.V.D. So, unfortunately, I'm now going to have to refer to him as just VD. Because, to call him JC would be too high an honor (Jesus reference) and to go with all four letters is just plain ridiculous. Even FDR and JFK only had the three letters. I'm giving this guy more letters than JFK in an abbreviation? I don't think so. What? Oh...Oh, don't give me that. Okay, fine! I would've given him all four letters back in the day of...THE DANCE. But, no. It's too late for that. That bridge has been burnt, Bucko.

2. VD answers a question about the beauty of his film about himself:

''I really opened myself up in "JCVD." I peeled back the skin of the fruit, cut the pulp and then took that very hard seed. In this film I cut that hard seed, and inside that seed was a kind of liquid cream substance of the man I am, or the woman you are.''

Sarah replies to this statement: ''OK —''

VD cutting her off: ''It was like being naked—I would love to be naked in front of you.''

VD cutting her off to explain: ''Not being naked being naked. I say such things in Hong Kong and they thought I was being a crazy Frenchman.''

~ Yeah, imagine that? I guess the people of Hong Kong are the crazy ones for thinking you're completely monkey-dumpling bonkers?

3. VD decides to take the direction of the interview into unforeseen territory, by asking some questions of his own: ''And are you 27, or 32?''
Sarah, probably overjoyed: ''I'm 22.''

''You can come find me, I will be the one with the very broad shoulders, dark hair and a simple suit. We can have some champagne, you and me.''

That was the end of the interview. May I just say...bravo. BRAVO, Crazy Belgian Waffle-head! If I had roses, I would present them to you. Sarah, I sincerely applaud your considerable efforts in whatever it took to survive this interview and hope you didn't get any of VD's creamy seeds or whatever on you. Oy vey.

WARNING: THIS REALLY HAPPENED. These were NOT quotes from a SATIRICAL PIECE. This was a quote from a REAL interview on the REAL Newsweek.

PS: Go vote for Crotchety Old Man, over at humorbloggers.com or small elves resembling Richard Simmons without the perkiness will force you to sweat to the oldies until they cue dueling banjos, then it will get really interesting and there will be a pineapple and-You know what? You better just go ahead and go vote for him, because you don't even want to hear the rest of that business. Trust me.