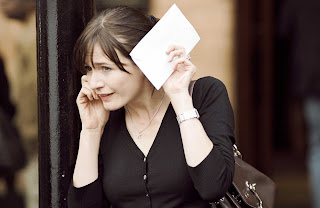 A Quick Legal Statement: On the off chance that it's really a Russian saying in Emily's anecdote, I renege on kissing anyone's Smirnoff. It was totally said in jest and not a legally binding agreement. My lawyer says so.


Whew! Now that that's over with, let's get on with the quote. NBC's Late Night With Conan O'Brien gets onto Say what? yet again. Emily Mortimer stopped by Late Night not too long ago to promote her recent movie, Transsiberian. She found herself talking about a former Russian poet she'd dated and the downfall of their relationship. Yes, perfect setting for humor, we know. Emily says as follows:

But I got about half way through and then he woke up and he cried. It was awful. (Audience makes a collective 'aw' sound) And he said-and he said he'd had a mustache since he was fourteen years old and that you know, in Russia, they had a saying that eat-uh-no, what was it? Kissing- (changing to a Russian accent) 'Kissing a man without a mustache is like eating an egg without salt.' ''

According to Emily, things started to go steadily downhill after that and they broke up. Not exactly a plot twist. So, the moral of the story is: Don't shave sleeping people without their consent. They will not be happy. . .Unless they're into that sort of thing . . . But most people aren't . . . So, check on that beforehand if you're making any plans.
Posted by JD and Lucy at 4:37 PM 3 comments: Links to this post