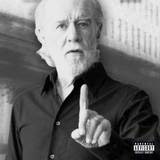 JD's quotes:
George Carlin put on his usual intelligent, thought provoking and funny show when he did Doin' it again for HBO-one of many specials he's done for the network. Here are the quotes I can actually get away with quoting:

''You ever been talking to someone and you laugh through your nose and blow a snot on your shirt?''

''Cuz I'm an American and I expect a little cancer in my food and water.''

While joking about just the kind of sensitive subjects that comedians aren't supposed to joke about, George proceeds to ask the audience to:


One from George's list of things you never see:

George only agrees with some feminist vocabulary changes:

''They want me to call that thing in the street, a personhole cover. I think that's taking it a little bit too far. What would you call a ladies' man? A person's person? That would make a He-man an It-person. Little kids would be afraid of the boogeyperson. They'd look up in the sky and see the person in the moon. Guys would say ''Come back here and fight like a person'' and we'd all sing ''For it's a jolly good person''. That's the kind of thing you would hear on Late Night with David Letterperson! You know what I mean?''

Near the end of the show George begins his admirable rant about New Wave, sugarcoated language. Among his gripes are the changes from ''partly cloudy'' to ''partly sunny'' but one, he points out, will actually make him invincible:


Check out one of George's Wordsmith exhibitions on The Tonight Show with Jay Leno: