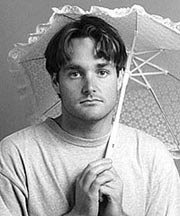 
Polite and unassuming at first glance; at second glance a twisted, strange fellow. A comedic writer and actor from SNL, That 70's show and The Brothers Solomon; we address Mr. Will Forte. Will made a notorious appearance on Late Night with Conan O'Brien a while back. He raised two interesting subjects in particular. One of the subjects being a rumor about drummer Max Weinberg and his NBC shower room etiquette which caused uproarious laughter, confusion, awkward silence from Max and a look of horror on O'Brien's face, then nervous laughter and threat of a potential law suit from Weinberg. I won't say what Max was implicated in exactly but they mentioned Bigfoot sightings and a blow dryer. During the same notorious interview, Forte brought up a unique tourist attraction he'd visited while on vacation.

Again, I won't say exactly what the tourist attraction was but he brought a picture of himself at the establishment and these words were uttered by Forte while discussing it:

''I learned that if I ever even had the thought that I could please a female whale sexually, I was mistaken.''

...The whales of the world are glad you've been dissuaded from future attempts probably Will. Let's keep in mind, this is the same guy who sang a country song to his mother on Live television about how he'd miss her when she's dead. Strange boy.


Check out Will Forte and Kirsten Wiig's hilarious sketch pertaining to the writers' strike:

Posted by JD and Lucy at 4:26 PM No comments: Links to this post