Bernard Hopkins has an unusual complaint 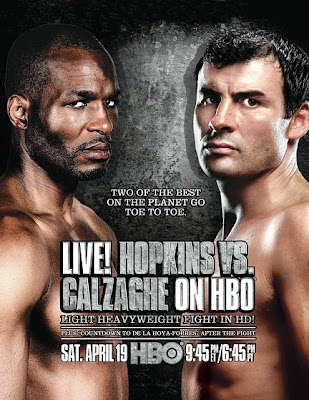 After Bernard ''The Executioner'' Hopkins ensured a thoroughly awkward fight with Joe Calzaghe, he managed to have one of the best post fight interviews in recent memory with Max Kellerman. By the way, I take back every unkind thing I may have ever said about Max. He's grown on me since he stepped into HBO Boxing. Before the fight, Hopkins made a small fuss at the Ricky Hatton/Floyd Mayweather weigh-in, by telling Joe Calzaghe in front of the cameras:

Of course, thanks to Calzaghe's work rate and Bernard's unwillingness to be the aggressor with a fighter who clearly wasn't able to hurt him, Bernard did in fact lose to a white person and a white boy at the same time. Bernard was a great actor as he-in my opinion- doubled over in pain after a slightly low blow, attempting to get the ref to take a point from Calzaghe. After the fight ended, Max Kellerman became the man of the hour by questioning the damage done by Calzaghe's low blow.

''Okay, um, the world also saw a punch that did not seem to land in a debilitating spot. You reacted as though it did. The crowd seemed not to believe it. You're looking at me incredulously. Here it is. Let's look at it here. And describe what you see-and what you felt at the time.''

''Yeah, but right there looks just below the belt.''

''Right here, where this sign is at. Right here. Right on this patch here. That's my crotch (Hopkins technically says ''Crouch'' but we know what he means). I mean, I ain't gonna ask you to feel it but it's right there...(Kellerman laughs and Hopkins smirks) I mean, you pointed it out. You set yourself up with it but, that's what he hit me-right there. And it sort of knocked my private outside my cup.''

I can honestly say, I've never heard that particular complaint after witnessing years of boxing fights and interviews. Watching Max Kellerman try to maintain a straight face with all of his might and professionalism after that comment and compliment Hopkins on a good fight was the perfect end to this interview. Max moved up a few notches in my book tonight. The poor guy didn't even know that having to touch Bernard's private crouch was a risk he'd have to take when signing on with HBO.

Posted by JD and Lucy at 7:24 PM No comments: Links to this post