Is it a gerbil or just a tickle? (Curb Your Enthusiasm Quotes from season six) 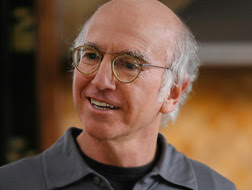 You may have missed Larry David playing Larry David in the sixth season of Curb Your Enthusiasm for several reasons. Maybe you canceled your subscription to HBO because they keep starting series without finishing them, for instance. Maybe you've been spending too much time looking at blogs and it distracted you [that's perfectly acceptable by the way]. Maybe you've developed a prejudice against bald lead actors [Unacceptable]. Who knows? Either way, you've missed more appearances by Ted Danson and Richard Lewis, as well as new celebrity faces like Michael McKean, Vivica A. Fox, Lucy Lawless, Tim Meadows, Tia Carrere, John McEnroe and more. Here are a few Larry quotes that may paint a picture of what you were missing this past season:


''Just look at this schmohawk over here.''

''However, in the interest of full disclosure, I will tell you that um-I do have a tickle in my anus.''

''Would you say my balls are unusually long?''

''So-so let me- so your last-your last name is Black. Th-th-that's like if my last name was-was Jew, like Larry Jew...cuz I'm Jewish.''

''Um-I'm so sorry...First of all, you have to understand something, okay? My friend Jeff DID NOT KNOW-DID NOT KNOW-that there was a penis in that box when he picked that up from the bakery.''

''You know what? We love each other...me and my bald brothers.''

PS: JB Smooth was the star of this season as far as I'm concerned. Playing Leon, he and Larry traded excellent life advice to each other. Excellent for us anyway. Not so much for them.

Check out a promo for season six:

Posted by JD and Lucy at 5:12 PM No comments: Links to this post