While you do THAT, you can massage the grapes. . .wink, wink, nudge, nudge

~ Chris Parnell (On the right) in the infamous Cowbell sketch

Every year or two, some jerk gets clever and writes an article with a title along the lines of ''Saturday Night Dead'' making an obvious pun on Saturday Night Live. Still, even though I don't watch EVERY SNL episode, not a year goes by when I don't come across at least a few new sketches that I never forget.

Forrrrrrr instance, I'll never forget the cork soaking sketch. Of this much, I am sure. If I'm a senile old lady at age 134 and I can't remember the name of any of my 78 cats which I'm sure I'll be living with by then, I'll still remember the entire cork soaking sketch. I'll know everyone involved, like host/musical guest Janet Jackson who couldn't keep a straight face trying to avoid the obvious implied words and of course Horatio Sanz and Jimmy Fallon, who could rarely keep a straight face EVER when in the same sketch together.

The setting: A tour group is being lead through the workings of a vineyard, you see. The vineyard is either in Italy or just run by an italian family, something like that. Jimmy Fallon plays ''Marcello'' and Horatio plays ''Giuseppe'' and they are the tour guides. They bring the crowd into the place where they, ahem, soak the corks for the wine bottles. Here's a quote from this completely, squeaky clean, non-vulgar sketch:

Chris Parnell as ''tour group guy'': Do you ever run out of corks to soak?

Horatio/Giuseppe: And I thought Marcello would need more corks.

Jimmy/Marcello: So, we soaked each other's corks at the same time. Remember that?

Horatio/Giuseppe: Can you imagine that? Me soaking his cork while he soak mine? . . .Oh boy

Horatio/Giuseppe: What year was that?

Jimmy/Marcello: What year? The year we soaked each other's corks?

Jimmy/Marcello: Yeah, that was what? It was like sixtyyy..., late sixties right?

Horatio/Giuseppe: I want to say seventy. . .

Jimmy/Marcello: . . . Now, you're sure it wasn't earlier than that?

Horatio/Giuseppe: Eh well, it was some time around there.

For years I will remember the goofy look on Maya Rudolph's face when she enters the room and Rachel Dratch as a very old, experienced soaker of corks. It's a classic. Right up there with Dana Carvey getting down with the pepper mill, which I dream about at least one night a week. That was hot.
Posted by JD and Lucy at 11:06 PM 2 comments: Links to this post

Hey T, I should get my own National Geographic Special, no? 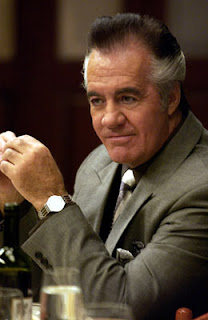 
Tony Sirico plays my favorite Sopranos character. His character is the eccentric Paulie Gualtieri, aka Paulie ''Walnuts''. Paulie was far and away the source of most blatant humor on the show, in my humble opinion. He was full of Goombah brand humor, Goombah brand logic. Goombah brand BS. The black belt master of Goombate (pronounced: Goom-bah-tay, see: Italian Martial arts).

Somebody requested quotes from The Sopranos last week or so, something we hadn't touched on yet, so I did a post of the famous chicken soup for the soul quote. I've had a chance to review several Sopranos episodes again and I have to say, although the last few seasons were alright, watching the episodes from the first three or so, I was reminded of how great the show really was. The straight humor was much more frequent then. The Sopranos shares a common bond with Deadwood other than being an HBO broadcast.

They both have a freakish ability to be funny in the context of brutal, violent dramas. It's a kind of magic that they work. Both dramatic series, I consider to be as funny as any sitcom or sketch comedy ever was...in their own way. I like to laugh when I don't expect it. When you're looking for a punch line, it's hard to be surprised. On a show like this when life is grave and somebody says something completely absurd and startles a belly laugh out of you, it's a blast. The Sopranos did this constantly in their first few seasons.

To celebrate the king of Sopranos humor, here's one of my favorite conversations involving Paulie ''Walnuts'' Gualtieri as he sits with ''T''-Tony Soprano (James Gandolfini) and they watch a nature program about snakes:

Paulie: Amazing thing about snakes, is that they reproduce spontaneously.

Tony: What do you mean?

Paulie: They have both male and female sex organs. That's why somebody you don't trust, you call a snake. How can you trust a guy who can literally 'go f**k themselves'?

Tony: . . . Don't you think that expression would come from the Adam and Eve story? When the snake tempted Eve to bite the apple.

Paulie: Hey, snakes were f**kin' themselves long before Adam and Eve showed up, T.

One pound of sausage at Satriale's: $4.49
One Lap-dance at the Bing: $20
One billable hour of legal counsel from Uncle Junior's attorney: $500.
A lifetime of counseling for Tony and AJ: $841,753
One lesson from Professor Paulie's Goomba BS 101 course: Priceless