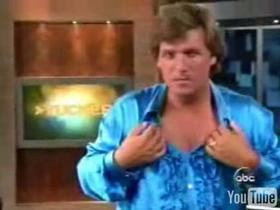 Known from shows on PBS, CNN and MSNBC journalist Tucker Carlson matches the bow-tie look and republican attitude with a wide variety of statements that stick in people's head for better or worse. Here we quote him revisiting a ''controversial'' statement he made once upon a time while stopping by Late Night with Conan O'Brien:

''And so I said I thought, you know, one liberal addition to sex was, you know, recreational female bisexuality. I thought that was a good thing. It's something that liberals gave us and I can get behind and support really strongly.''

Ohhhhh yeah, conservatives swing too baby; this much is clear.

Here's Tucker just completely rocking out like a conservative hippy but without the bow-tie: